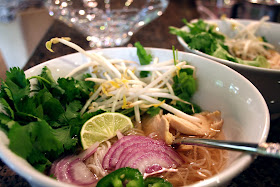 I saw Nick Nolte's mug shot in my mirror this morning. When I spilled coffee on my shirt a few minutes later, I thought my look was complete.

I sat down at the computer to see what was new. And somehow I lost a slipper while sitting there.

I've just learned to accept myself.

At least I have this pho.

When we lived in Houston, I bet there were many amazing Vietnamese pho options. I never saw them. They went right by my radar. Too busy eating Tex-Mex, I guess.

Then we moved to Los Angeles and we started going to Pho So 1. We pronounced it Foh Sew One. Which is wrong, we learned that later. But it was fun to say and we still say it that way. It's where we fell in love with pho. So we can call it whatever we want, right? We were told, and I truly hope this is true since I'm about to put it in writing, that "So 1" means Number 1. As in the original restaurant - perhaps there was a Pho So 2? Regardless, I like that translation. I agree - Pho is Number 1.

Then we moved to Atlanta. No more Pho So 1. There is plenty of pho here. But it doesn't measure up to Pho So 1. So when I came across this recipe, I thought why not? I'm so glad I made it. It's not made the traditional way, I'm told that can take days, but it's very close to how I remember the pho at Pho So 1.

So here you go.

Quick Vietnamese Chicken Pho (And here is how you say it.)
adapted from Steamy Kitchen

Pho Broth:
2 tablespoons whole coriander seeds
4 whole cloves
2 whole star anise (My friend Matt Baird mailed me some from Florida! So nice!)
2 quarts chicken stock (homemade, if you have it)
bone-in, skin-on chicken breast (you can use a boneless, skinless OR use the breast meat from a Costco rotisserie chicken)
1/2 onion
1 3-inch chunk of ginger, sliced and smashed with side of knife
1-2 tablespoons sugar
1-2 tablespoons fish sauce

To make the broth, heat a skillet over medium heat. Add the coriander seeds, cloves, and star anise and toast until you can smell them, about 3-4 minutes. Immediately remove from pan to avoid burning.

In a Dutch oven or other large pot, add all of the broth ingredients (unless you are using the Costco rotisserie chicken, it's already cooked and you can add it when you serve the soup). Bring to a boil. Reduce heat to low or medium-low and let simmer for 20 minutes, skimming the surface frequently. Use tongs to remove the chicken breasts and shred the meat, discarding the bone (if you used a bone-in breast).

Prepare the noodles as per directions on the package.

Ladle the broth into bowls. Divide the sliced chicken breast and noodles evenly into each bowl. Top with bean sprouts, cilantro, red onion, and other accompaniments as desired and enjoy.

P.S. Can you count how many times I typed the word pho?
Sandra
Share